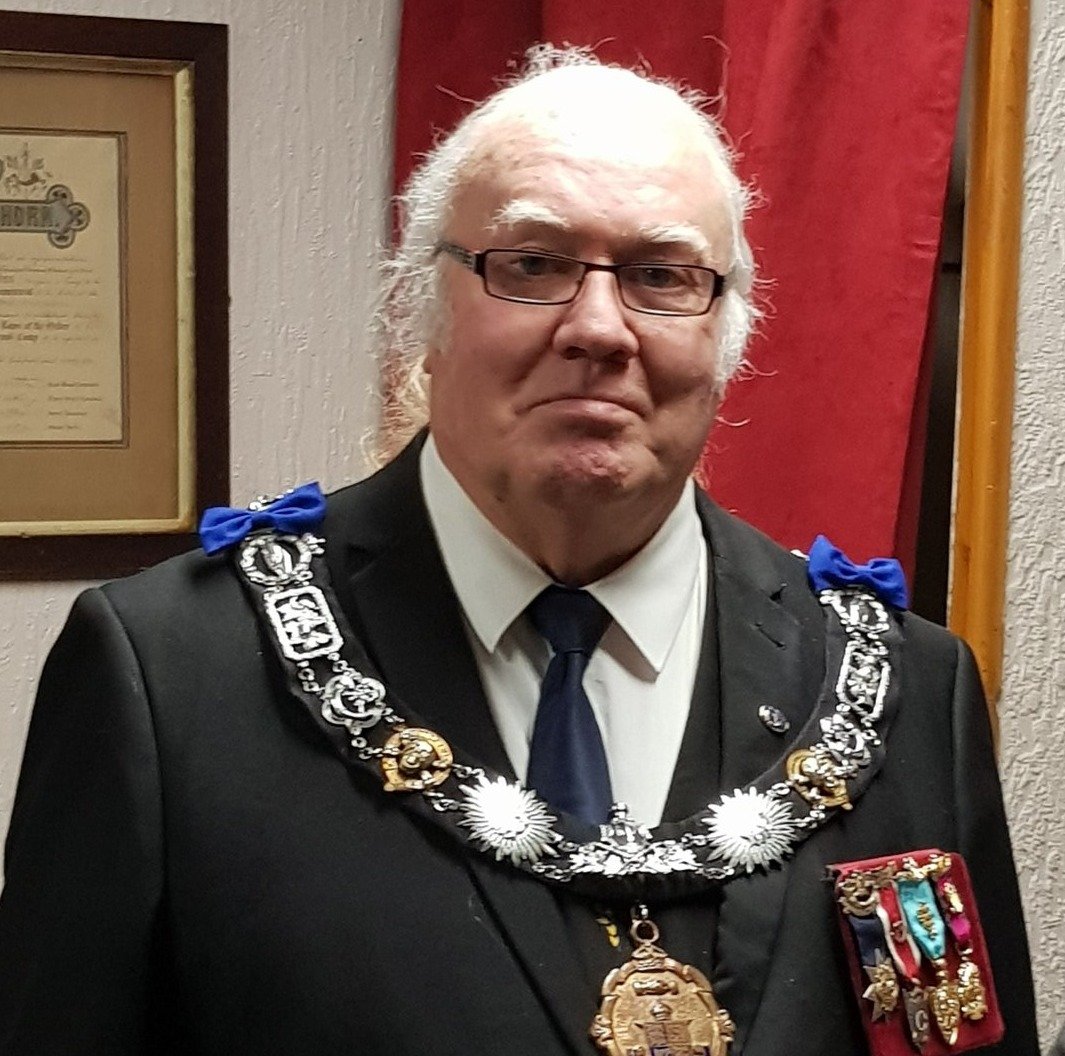 Our Most Worthy KOS Stephen Preston, Grand Knight Commander of the GUOKGH was presented with the Chain Collar of the Order at a ceremony held at the Headquarters of the KGH on Thursday, 24th November 2022.   The ceremony was presided over by the Knight Commander of the oldest active encampment of the KGH, No. 24 Whitworth Enc., AKC Keith Lamb OM.   The GKC was supported by three of the most senior officers of the Order, AKC David Mattimoe PGKC OM Deputy Grand Scribe, AKC Jeff Daley PGKC OM Grand Trustee and SSKC George Bramhald PGKC OM.  The Deputy Grand Knight Commander, KOS Neville Dart who is also Scribe of 24 Whitworth Enc., explained the significance and symbolism of the Chain Collar which is shown below.

The chain collar represents the responsibility and authority attached to the high rank of the Grand Knight Commander of the GUOKGH.  It consists of two parts; the chain and the badge and has its origins in the livery collars of the Middle Ages and it reminds us of the oath of loyalty to the Crown and Constitution and duty to the Order.

The chain is made up of 20 linked pieces each having its own special significance:  At the centre is a knight above a sword and axe.  These are the symbols of his status and readiness for duty. The sword symbolises the dual concepts of life and death whist the axe is a symbol of readiness for battle or for work.  At either side of the knight there is a silver star bearing the initials KGH and these are bordered by the death’s head, a symbol of the KGH and which reminds us of our own mortality. The skull is surrounded by a garter bearing the motto “Nemo Mortalium Omnibus Horis Sapit” which from our origins within the RAOB and attributed to philosopher Desiderus Erasmus (1467-1536) means “no man can be at all times wise”.   Next is a key symbol of the KGH, the horn of truth and power, dominion and glory.  The acorns represent unlimited potential and oak leaves represent longevity, strength, endurance, power, justice and honesty.  The hands of friendship remind us of the goodwill we show to others and our willingness to share what we have with those in need.  The ouroborus, or self-eating snake, is a sign of eternity, self-reliance and unity. Seen here with a coiled rope, it signifies enlightenment and tells the story of ignorance and reality when a man who in the darkness mistook the rope for a snake and ran away but in the light of day, he saw the rope for what it truly was.

The Badge, taken from the regalia of No 14 T A McCullagh Encampment (Bishop Auckland) inaugurated 25 January 1895 depicts the hands of friendship above the shield, which is quartered, depicting in the first and fourth quarters the three passant guardant lions of England, Normandy and Aquitaine, in the second, the Lion Rampant of Scotland, and in the third, Azure, the Harp stringed Argent for Ireland.   The motto of the Order is shown below the shield: “Rege, Lege et Grege” which translates from Latin as meaning “For The King, The Law and the Country”.